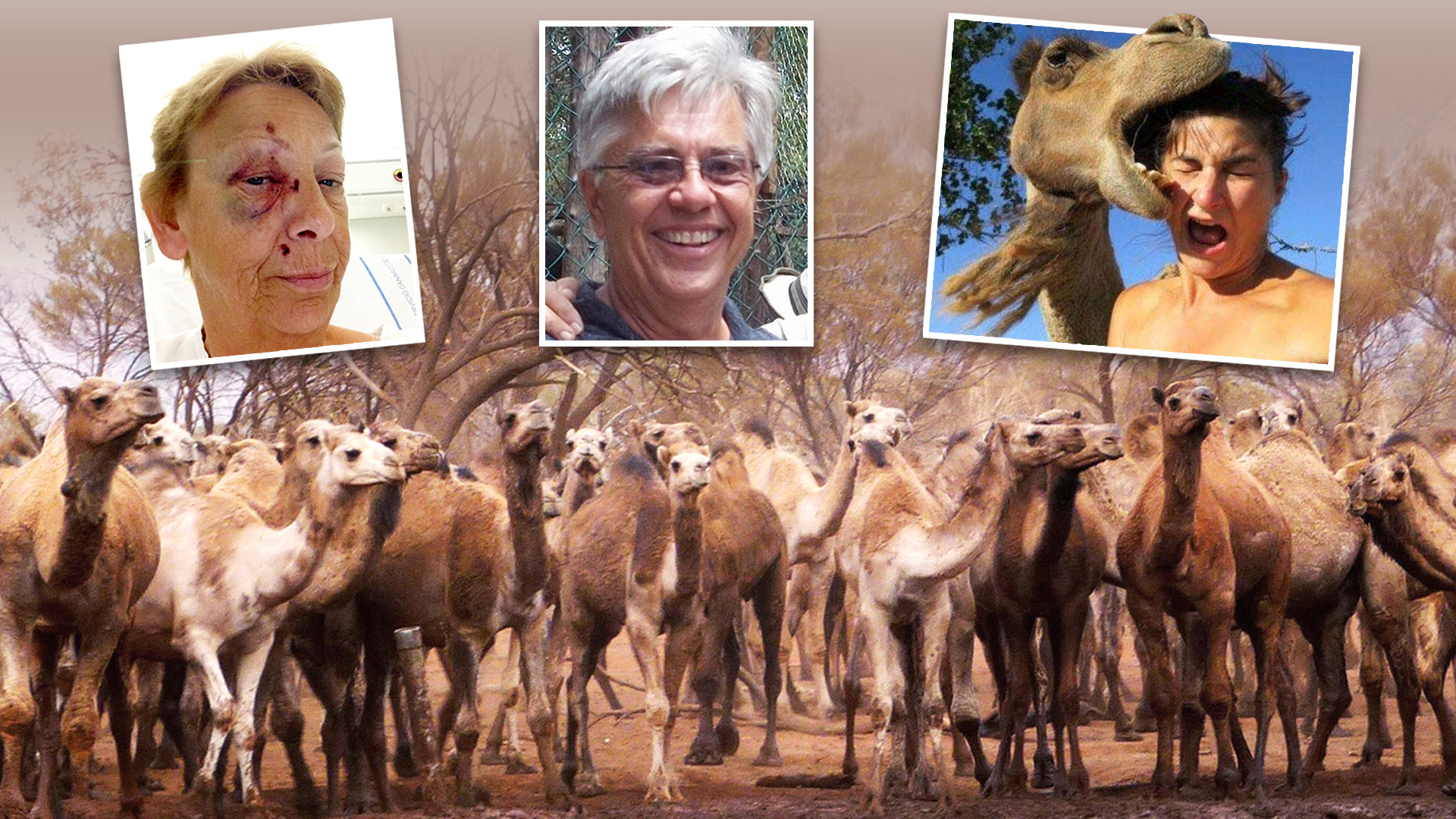 CAMELS are well known for having a temper – but it’s not just the famous spitting you need to watch out for.

The half-ton beasts pack a powerful kick and a vicious bite that can rip a man’s head off.

One such tragedy emerged yesterday in Siberia, where a handler was bitten and trampled to death at a children’s holiday camp.

The furious camel reportedly turned on him after he hit it in the face and tugged its reins sharply.

Horror video shows it lunging at the man, 51, and trampling him into the snow-covered ground in Omsk.

“The animal did not appreciate such treatment,” said a local report.

“The man paid with his life after hitting the animal in the face.”

There have been several fatal camel attacks on humans in recent years.

Male dromedaries – the Arabian species with one hump – can stand 7ft 10in at the shoulder and weigh 880lbs to 1,500lbs.

Two-humped camels – bactrians – have shorter legs but are bulkier, the heaviest males reaching up to a ton in weight.

Both species can sprint at up to 40mph.

One camel expert said last year: “A full grown adult can fit your head, arm, leg or torso in its mouth.

“They have enough strength to crush arms and legs along with your neck, while kicking forwards and backwards.

“Camels will do a combination of all those things while kneeling forward to crush you.”

In March 2022 a rampaging camel killed two men after escaping from its enclosure at Shirley Farms petting zoo in Tennessee.

Pals Bobby Matheny, 42, and Tommy Gunn, 67, were cornered and attacked while attempting to catch it.

Police officers then came under attack while helping to carry the fatally wounded victims to an ambulance.

The beast rammed their patrol car, forcing them to shoot it dead.

It is not known what triggered the camel’s frenzied attack.

One man reportedly had his head ripped off in revenge for leaving a thirsty camel tied up in 43C heat.

The owner, named as Urjaram, had been entertaining guests at his village home in Rajasthan, India, in May 2016.

He forgot he had left the camel outside with its legs tied in the hot sun all day.

It savaged him when he finally went to untie it, reported the Times of India.

“The animal lifted him by the neck and threw him on to the ground, chewed the body and severed the head,” villager Thakara Ram said.

He said the same camel had attacked its master before.

After the fatal mauling, it reportedly took 25 villagers six hours to calm the animal down.

American expat Richard Mileski was suffocated to death by a camel at the monkey sanctuary he ran in Tulum, Mexico, in October 2014.

The beast charged at wildlife lover Richard, 60, originally from Chicago, and dragged him to the ground.

Civil defence official Alberto Canto said: “The camel kicked and bit him practically to death, and when he was almost dead, he sat on him.

“Between the blows and the weight of the camel on top of him, he was asphyxiated.”

An employee heard his screams and tried to beat it off with a stick.

Reports at the time said the camel may have flipped after being denied his daily can of fizzy drink.

Mr Canto said one version was that Richard “would always give him a Coca-Cola to drink, and apparently, that day he didn’t give him the Coca-Cola.”

Banker-turned-camel breeder Peggye McNair, 73, was trampled to death by one her own animals in January 2015.

Sheriffs said the male dromedary was in rut – pumped with hormones ready for mating – when it suddenly got “aggressive”.

Mark had entered the pen, which was holding the male and two females, because a water trough was frozen.

The male trampled him, then killed Peggye as she tried to close the gate.

Authorities tracked it down and shot it dead.

Another camel was given a reprieve after killing a farmer’s wife by apparently trying to have sex with her.

Noel Weaver gave Pam a baby camel as a 60th birthday present in 2007.

Months later he found her dead with hoofprints on her face at their cattle and sheep ranch in Queensland, Australia.

The ten-month-old exotic pet, weighing 24st, had knocked her to the ground and tried to straddle her, reports said.

It had also previously tried to mate with the family’s pet goat.

Police said it may have been playing, but camel expert Chris Hill said he had no doubt its behaviour was sexual.

At Pam’s funeral, Noel told mourners: “You have to forgive the camel – he loved her very much.”

He insisted the killer camel should not be put down.

Karen Saccone was kicked and trampled all over her body[/caption]

Brit holidaymaker Karen Saccone, 61, narrowly escaped death when a camel threw her from the saddle on Spanish isle Fuerteventura in 2017.

The gran, from Derby, landed head-first but got her foot caught and was dragged along the beach by the half-ton beast.

Her panicked camel and another then kicked and trampled all over her.

She suffered a fractured pelvis, broken ribs, a collapsed lung and head and facial injuries.

Karen needed four months off work and was still suffering two years later when insurers agreed to a payout.

She said: “What was a lovely break turned into a holiday from hell.”

A herd of 6,000 thirsty camels marauded through a town in Australia’s Outback in November 2009.

They smashed down homes and trampled on each other in search of water, leaving animal corpses strewn in the streets.

They also blocked vital medical and food supply routes by occupying roads and the local air strip in Docker River.

Families were too terrified to leave their homes and called for help.

Authorities eventually used helicopters to round them up and shoot them.

Dromedaries live wild in Australia after being imported for transport and pack-carrying in the 19th century.

There are now an estimated 600,000 despite regular culls to keep numbers down.