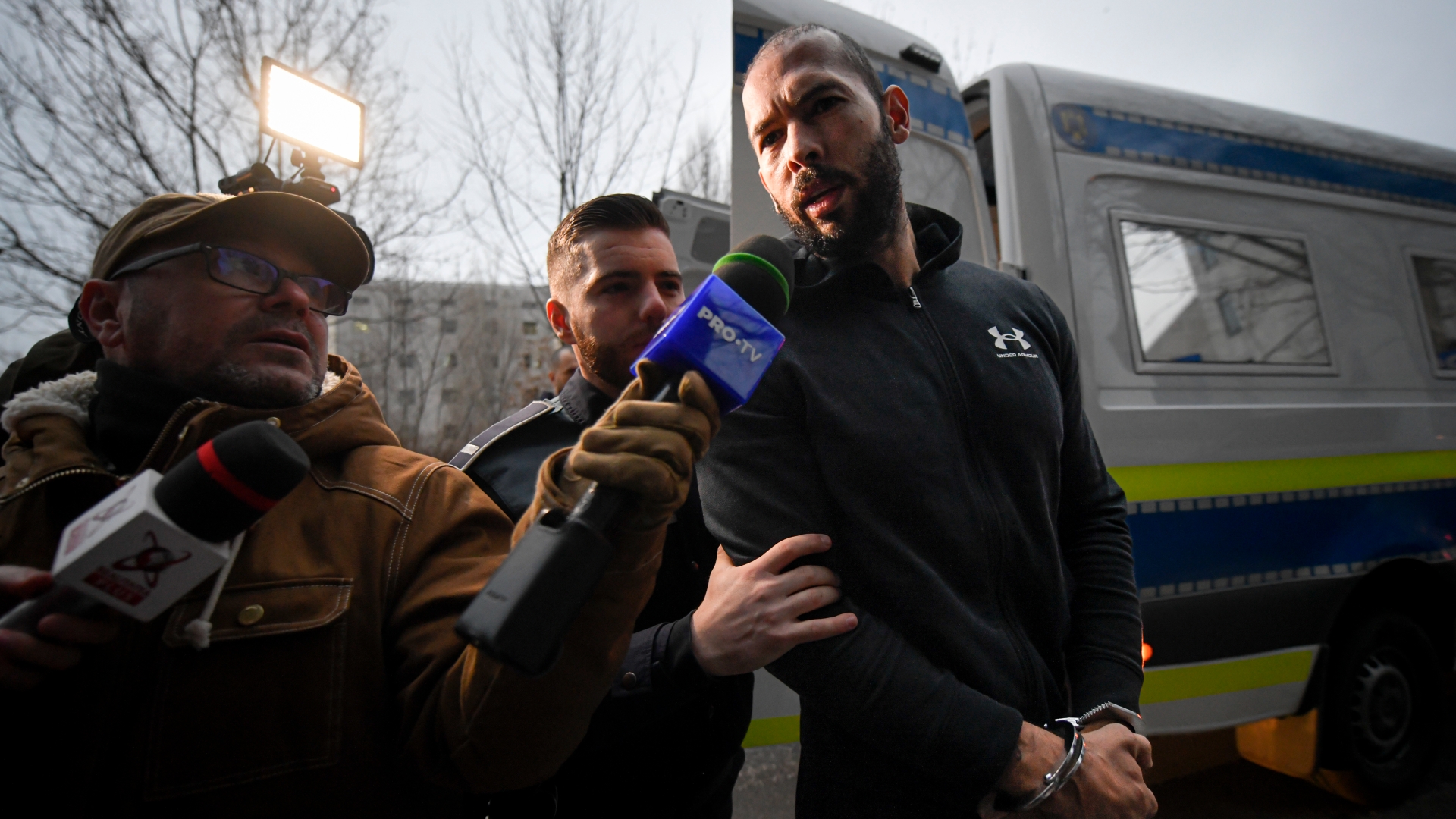 TOXIC Andrew Tate swaggered like he was on Big Brother as he arrived at a police station today for more questioning, an expert has claimed.

Body language pro Judi James said the disgraced influencer “appeared to absorb the attention like a celebrity wannabe” as he whinged at the crowds outside the building in Bucharest.

She pointed out his upright posture, squared shoulders and serious-looking frown[/caption]

Judi said Andrew ‘absorbed the attention like a celebrity wannabe’[/caption]

Andrew and his brother, Tristan, are being held in custody until the end of February as part of a probe into rape, human trafficking, and organised crime.

And on Wednesday morning, the shamed handcuffed pair ranted at reporters as they were frogmarched to Romania’s organised crime unit.

“As he is led through the press he appears to absorb the attention like the celebrity wannabe he was in his Big Brother days, even verbally engaging all the way in, turning his head to keep the dialogue up for as long a time as possible.”

She added: “Tristan can be seen performing what seems to be a wide smirk inside the van but as he steps down his brows rise and his eyes widen in what looks like a mask of innocence and surprise.

“Like Andrew he looks keen to communicate the minute he hits fresh air and his swaggering walk, with a slight roll from side to side, as he is led away gives the impression of confidence and arrogance.”

It’s understood the brothers were taken to the police station as prosecutors were set to comb through the pair’s electronic equipment that were seized as part of the probe.

As the brothers arrived, Andrew told reporters: “They know we have done nothing wrong. This file is completely empty.

“Of course it’s unjust, there is no justice in Romania unfortunately.”

Asked whether he has hurt women, he said: “Of course not.”

Meanwhile, Tristan yelled: “There is no evidence against me.

“The authorities are planning to steal my cars and steal my money. That is why I am in jail.”

Police sources had told Gandul that the brothers would be escorted to DIICOT for computer searches.

Andrew and his brother were arrested in December after their luxury Romanian mansion was raided by police.

They are accused of luring women back to their villa, where at least six were reportedly forced to perform in adult videos that were then sold online.

As part of the wide-ranging probe, cops seized Andrew’s car collection – estimated by police sources to be worth around £6million.

The vehicles have been taken to an undisclosed location.

Former cop Luana Alexandra Radu, one of two alleged female accomplices held as part of the same probe, also arrived at DIICOT with the brothers on Wednesday, according to reports.

All four suspects are currently being held in prison in Romania after a judge ruled they must remain in custody until February 27.

Their lawyers deny all charges against them.

Neither is currently suspected of any wrongdoing and are being treated as potential witnesses.

He was dumped from the reality show after alleged footage of him beating a woman emerged online.

Andrew – supported by his brother – then spent years creating a warped empire promoting toxic worldviews which has infected legions of fans through TikTok.

Masquerading as lifestyle advice, much of the content is actually highly sexist and promotes violence against women.

His influence has had a worrying spread amongst teenage boys, with one UK MP saying he is “brainwashing” children.

Tate and his brother are alleged to have used the “loverboy” method to recruit women for their webcam business.

It is claimed they would strike up relationships with the women before moving them to their compound and webcam studio in Romania.

DIICOT claims the women would be compelled to perform webcam shows through “physical violence and mental coercion”.

The influencer was banned from Twitter in 2017 for violating its terms of service with his controversial comments.

In August, Tate was banned from a range of other social media sites – only to then be reinstated on Twitter after the company was taken over by Elon Musk.

But The Sun revealed that YouTube is still promoting Andrew’s business despite the allegations.

Police officers escort Tristan Tate outside the Directorate for Investigating Organized Crime and Terrorism (DIICOT) where prosecutors examine electronic equipment confiscated during the investigation in their case, in Bucharest, Romania, Wednesday, Jan. 25, 2023. Divisive influencer Andrew Tate and his brother Tristan, are held on charges of being part of an organized crime group, human […][/caption]